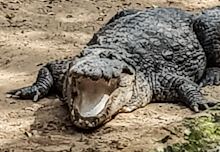 THE CROCODILE LYING LAZILY in the hot sunshine with its teeth lined jaws wide open lay motionless as we and many other visitors gaped at it with amazement.

We reached the Crocodile Bank at Semencheri (near Mahabalipuram) after a two hour drive northwards from Pondicherry along the East Coast Road (ECR), which as its name suggests runs close to the east coast of India. We drove through flat terrain with luxuriant vegetation. The road passes many picturesque backwaters and other water bodies, some covered with flowering waterlilies. We also passed a small collection of saltpans, alongside which there were small piles of white salt. This salt gathering area was on a much smaller scale than can be seen at the south eastern edge of Kutch. The road is dotted with numerous hatcheries for edible crustaceans such as shrimps and scampi.

The Crocodile Bank was established in 1976 by Romulus Whitaker and is now being run by his ex-wife, our friend Zai. It was started to breed cricodiles and other reptiles in captivity in order to counter the reduction of their populations in the wild. It is now an important centre for herpetology, education , wildlife conservation, and breeding reptiles. It is open to the public, who gain great enjoyment from seeing and learning about the reptiles.

We first visited the Crocodile Bank about five years ago. When we entered, my first impression was of looking at a sea of grey logs. On closer examination, these ‘logs ‘ were motionless crocodiles. We learnt that crocodiles and aligators are very somnolent unless they are hungry. Therefore, they tend to lie about motionless, basking in the sun or keeping cool in shallow water.

During our first visit, we saw a pair of beautifully coloured iguanas, which Zai and her colleagues were hoping would mate. She told us that they did produce a clutch of eggs eventually, and that some of the baby iguanas were enjoying life at the Crocodile Bank.

We were pressed for time on our visit in February 2020. So, we did not have a chance to have a good look around. On our first visit, Zai arranged for one of her team to give us what turned out to be a very informative tour.

I can strongly recommend a visit to Crocodile Bank. It is not far from the superb archaeological remains at Mahabalipuram and provides an interesting contrast to them. Instead of stones of historic interest, you can enjoy seeing creatures that have survived the passage of time even longer than the ruins.