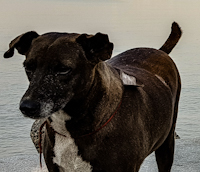 IT IS NOT SO OFTEN that I am invited to a dog’s birthday party in Bombay, let alone anywhere else. Yet, early one Sunday morning this February we were picked up by a friend and driven to Marine Drive with its elegant curving seafront lined with apartment blocks, many of which are designed in the Art Deco style.

We joined a group of our host’s congenial friends, all of whom had brought their dogs to the party. Everyone had arrived with snacks for breakfast. The group meets every Sunday and their dogs greet each other like old friends.

While we humans filled ourselves with sandwiches, patties, samosas, cakes (some eggless for strict vegetarians), biscuits, and hot tea, the dogs lapped up icecream. A few stray dogs joined the party whilst crows looked on enviously. Some of the stray dogs had thin string collars with small labels. These dogs are being considered for adoption by dog lovers. Stray dogs, often intelligent and very ‘street wise’, make good pets once they have had appropriate vaccinations.

We had attended our friend’s dog’s birthday two years ago. It was a relatively quiet occasion because the seashore promenade on Marine Drive had been fairly empty apart from occasional joggers and cyclists. This year it was different.

The promenade was chock full of children out for an early morning charity fun(?) run. Swarms of children of school age were moving along the wide pavement, some bearing banners with the names of their schools. There was much shouting and maasti (fooling around). Most of the children were wearing black tee-shirts with the name of the charity for which they were raising money (Terry Fox Cancer fund). At first glance, this seemingly endless procession of kids with banners looked like a political rally.

Some of the children seemed not to know or care about the direction they were supposed to be running. Many of them stopped to pet the dogs and to take photos of each other with the creatures. We asked some children why they were out running. They answered that they had no idea but their teachers had told them to do it.

While the kids were running or walking past us, they made a great noise as already mentioned but every few minutes this was drowned out by powerful motorcycles racing at high speed along Marine Drive. We were told that this also happens late at night and each year this reckless, careless driving (‘rash driving’ in Indian English) results in many fatalities on Marine Drive.

When we arrived at the party there was a thick mist or haze that almost hid the buildings around and far across the bay. By the time we left, having enjoyed the party and all that was going on around us, visibility had improved and we could see across the bay much more clearly, but not perfectly.

I am looking forward to another doggy birthday party in Bombay next year! Take a lead from me: canine celebrations can be great fun.