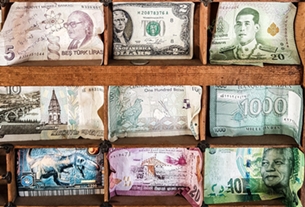 Back in 1983, I visited Bulgaria. I had been advised that it was very unwise to exchange currency in the country any other way than by using the state’s official foreign exchange desks. So, as soon as I disembarked at the railway station at Sofia, I changed some of my UK Pounds into Bulgarian Leva. Even at the official exchange rate, one Pound had a more than adequate spending power.

My friend and I took  a taxi to the city centre. When we arrived, the meter , I asked the driver how much we needed to pay. He answered:

“One Deutschmark, One Dollar, One Swiss Franc, or one Pound.”

I said that I wanted to pay in Bulgarian Leva. He said:

“The meter says only one Leva”

The driver turned around and said:

I repeat this true tale to emphasise how little local money was valued in comparison with so-called ‘hard currency’. Also, in a few months when the UK leaves the European Union, probably without a trade deal, the Pound, which is already sinking in value, might cease to be a hard currency. Who knows, but here in the UK we might prefer to be paid not in our own currency but in one of the harder currencies such as the US Dollar or the Euro.