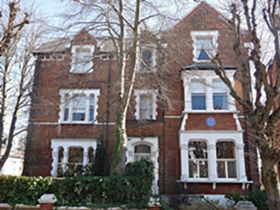 Between 1965 and 1970, I studied at Highgate School (founded 1565). Its main Victorian gothic building perches on the summit of Highgate Hill. About two fifths of a mile south east of the school, an architecturally unexceptional late Victorian residential building stands on Cromwell Avenue (number 65). Although this brick edifice may not look special, it harbours the ghosts of a lesser-known episode in the history of India’s struggle for independence from the British Empire. The only thing that hints at the interesting history of number 65 is a blue plaque commemorating the fact that the Indian patriot and philosopher Vinayak Damodar Savarkar, a father of Hindu nationalism, lived there once.

In 1905, a wealthy barrister and scholar of Sanskrit, Shyamji Krishnavarma, bought number 65 Cromwell Avenue and named it ‘India House’. He intended it to be a home away from home for Indian students studying in England. However, it became more than that. It became a centre where Indian politics was discussed and acted upon.

Very soon, India House became the nucleus for Indians who wanted India to break free from the British Empire by any means possible. These included: sending propaganda and literature (including bomb-making manuals) regarded as ‘subversive’ and ‘treasonable’ by the British to India; smuggling weapons and ammunition into India; and political assassinations both in England and India. Valentine Chirol, the Foreign Editor of the Times newspaper wrote that India House was “…the most dangerous organisation outside India…”. As such, India House was under the constant vigilance of Scotland Yard, but despite this, its members were able to carry out real-life exploits that rivalled the derring-do of characters in John Buchan’s fiction.

India House thrived until late 1909. During that year, one of its members carried out an assassination in London. After that deadly deed, activities at India House declined rapidly, and it was closed for ever by the beginning of 1910.

My new book, “Ideas, Bombs, and Bullets”, describes the history of Highgate’s India House and the activities that originated there. In addition, it explores the ideas that led Krishnavarma to ‘create’ India House and the lives led by people who lived in, or congregated, at the place. Also, it contains the background to the replica of 65 Cromwell Road that can now be viewed and entered by visitors to Kutch, an arid part of the western Indian state of Gujarat.

Until I visited Kutch in 2018, forty-eight years after leaving Highgate School, I had not known that my alma-mater is situated so close to the site of such an exciting short episode in the history of anti-colonialism. Boldly, I suggest that this story is also unknown to most pupils, who have attended Highgate School since 1905. Furthermore, Highgate’s India House and Shyamji Krishnavarma are practically unknown amongst many educated Indians, with whom I have spoken. I hope that “Ideas, Bombs, and Bullets” will help to make the exploits and aspirations of the members of India House more widely known.

BUY a paperback version of IDEAS, BOMBS, and BULLETS here:

BUY an e-book version of IDEAS, BOMBS, and BULLETS here:

1 thought on “Revolution in north London”