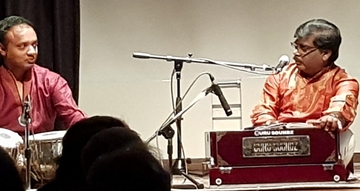 I enjoy attending events at the Nehru Centre, the Indian High Commission’s cultural centre in London. However, the audience can become quite unruly occasionally.

Only afew days ago, I attended a concert of Bengali and Hindi songs pertformed by an excellent Bengali male vocalist, Soumyen Adhikari who accompanied himself on a harmonium. He was also accompanied by a superb tabla player.

The audience was, as is often the case, restless. People arrived late throughout the performance. Others kept moving from one seat to another or leaving the auditorium only to return a few minutes later. All around us people in the audience were chatting to each other loudly whilst the musicians performed. They would not be silent even after having been asked repeatedly. All of these disturbances are quite normal amongst Indian audiences and are more or less tolerable.

What really upset me at this particular concert was the ignorant comments shouted by some members of the audience. After the singer had sung several beautiful songs in Bengali, some people began shouting things like “Sing something in Hindi”, “we can’t understand Bengali”, and “enough of Bengali songs”.

I cannot understand either Hindi or Bengali, but that does not detract from my enjoyment of songs sung in these languages. What is important to me is that the singer has a good voice and that the musicians play well. Just the lovely sounds of the songs and the music is a great pleasure for me. It upset me that so many of those around me lacked the  ability to appreciate the beauty of what was being played. Their approach was so parochial that all they wanted was something familiar, which they had heard over and over many times before. I felt sorry for the singer, who is clearly a masterful performer whom I would happily hear again.

1 thought on “A vulgar audience”