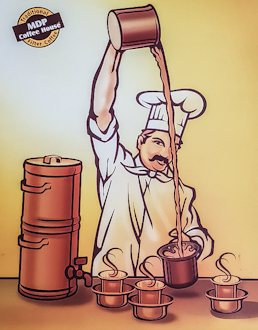 Traditionally, South Indian filter coffee is served piping hot in small conical metal breakers. The beakers, which are almost too hot to hold, stand in deep cylindrical metal saucers, as shown in the picture.

To cool the coffee so that it reaches a drinkable temperature, one lifts the hot beaker out of the saucer, and then pours the coffee from the beaker into the saucer from as greater height as you dare. Then, you pour the slightly cooler coffee back into the saucer. The procedure is repeated until the beverage reaches the desired temperature.

The person making the coffee repeatedly scoops the bubbling boiling milk, which is added to the coffee, from its pot on the heat, and then pours it back from a great height. The stream of boiling milk is often quite long.

My late father-in-law, a witty man, referring to the pouring from a height involved in filter coffee making and drinking, used to ask us when we visited a coffee house in Bangalore : “How many yards of coffee do you want?”

Note: 1 yard is a measure of length a little less than 1 metre

2 thoughts on “Coffee by the yard”