As a young child I was fascinated by the following story, which may be apocryphal. Archimedes (c287-c212 BC), the great Greek physicist, mathematician, engineer, and general genius, is reputed to have made an important discovery whilst taking a bath. He noticed that the level of water in his bath rose as he immersed himself in it. This led to his famous Principle. When he realised the significance of the change in water level, he is said to have leapt out of his bath yelling “Eureka”, which is the Greek for “I have found it.” 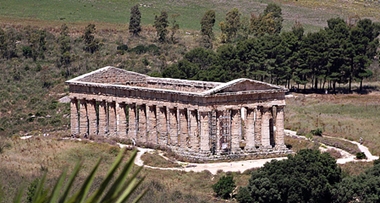 In 1960, my father had to attend a conference at Kyrenia (Girne in Turkish), which is now in Turkish Northern Cyprus. It was then part of one unified country. We, the rest of my family, accompanied him. On our way, we had to change ‘planes in Athens. I remember walking down the steps that led out of the aircraft from London and feeling my face hit by a wave of burning hot air. I thought for a moment that I was feeling the exhaust from the ‘plane’s engines, but soon realised that the air at the airport had a very high ambient temperature.

On our return from Cyprus, we spent a few days in Athens. Our visit happened shortly after I had learnt about Archimedes and his Principle at school. In Athens, we visited numerous ancient Greek and Roman sites, and this put the idea into my head that somewhere amongst these ancient ruins we should be able to locate the famous bath out of which Archimedes leapt. Rather sportingly, my parents hired a taxi and explained to the driver the nature of our quest. He was happy to spend hours driving us around Athens, stopping regularly to enquire about the location of the bath. It was a fruitless quest. During the hours that we spent with our driver, he told us that he was Jewish. When he realised that we were his co-religionists, albeit completely non-practicing, he took us to see a synagogue, which was unmemorable architecturally.

Sadly, after spending time in the taxi, we were not able to exclaim “Eureka.”

Some months after we returned to London, I discovered that Archimedes had lived in Syracuse (Sicily) rather than Athens. If his bath had ever existed and still happened to be in existence, which was highly unlikely after so many centuries had elapsed since his death, it was there that one needed to search for it, rather than in Athens.