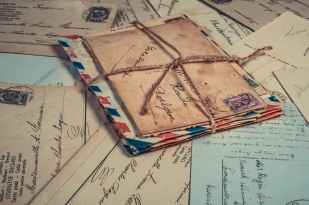 As a young boy in the early 1960s, I loved receiving mail. My parents were sent far more letters and packages than me and I was envious of them. With the experience of age, I guess I should not have been jealous of them because many of their mail items must have contained undesirable material such as bills, tax demands, and official notices.  As I received only a very few things from the post man, I took action to increase the amount of mail I received.

I used to scour newspapers and magazines for forms that when filled in and sent off, led to holiday brochures being sent to me free of charge. I received booklets extolling the virtues of holiday resorts like the Norfolk Broads and seaside towns all over the UK. Also, I wrote to the town halls of every London Borough to ask them to send me their official handbooks, which they did.

Once, my parents received a colourful package from the Readers Digest. They gave it to me to enjoy. It contained beautiful pictures extracted from a world atlas they were trying to sell. There was also a piece of paper with two stickers on it. One said ‘no thanks’ and the other ‘yes please’. I stuck the latter onto a pre-paid reply form and posted it. Some weeks later, a beautiful world atlas was delivered to our home. My parents were not too thrilled by its arrival, but saw its value and sent a cheque to pay for it.

Some months later, more publicity material arrived from the Readers Digest. This time it advertised a three volume encyclopaedia of gardening. It looked irresistibly wonderful, even to a non-gardening youngster like me. Without consulting my parents, I sent off the ‘yes please’ sticker. After some delay, a huge parcel was delivered to our home. I unwrapped it. It contained the three beautifully illustrated hardback volumes of the gardening encyclopaedia and a fine wooden case to contain it. My parents were not at all pleased. They re-wrapped the lovely encyclopaedia and at great expense posted it back to the Readers Digest. From then on, they made certain that no more post from the Readers Digest reached me before first having been torn up.

The best coupon I ever filled in was to a Roman Catholic organisation. The coupon promised to send me twenty one booklets about Roman Catholicism. They arrived at weekly intervals, providing me with at least one package a week for 21 weeks. I never read any of them because for me it was the thrill of receiving post that I enjoyed rather than what was in the post.

Even though a lot of the mail I receive from the post man/woman is unexciting, I still get a thrilling sense of expectation when letters and packages addressed to me arrive in our letter box.

Photo by Ylanite Koppens on Pexels.com