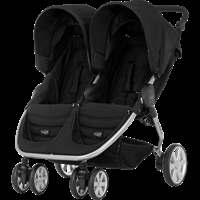 All public transport buses in London have dedicated areas for buggies (baby strollers, push-chairs etc.) Other passengers need to, or are made to feel that they need to, move out of the way so that a buggy can be parked in the designated area.  So far so good. Many child carers use their childrens. buggies as shopping trolleys, often overloaded with bags of merchandise. Often, the child or children being transported in the buggies are removed from them during the bus journey and then occupy a passener seat. The empty buggies then simply take up space that could be used by other passengers on a crowded vehicle.

Now, there are clear signs by the designated ‘buggy area’ that state quite clearly that the area is also for use by persons confined to wheelchairs. These signs also make it very clear that wheelchair users have priority over buggies in the special area on the bus.

Clashes, often quite uncivil, occur if too many carers pushing buggies are competing for the the limited space available for buggies and wheelchairs. Or, even worse, battles can break out between whelchair users who want to board a bus and buggy owners, who are already on board the bus. Both the child carers and the wheelchair-bound  people can often behave quite unpleasantly. Unlike the wheelchair occupant, almost all baby buggies can be folded up and placed in the luggage area that is available on every bus.

Yesterday, it was a sunny afternoon and I was travelling in a bus past Swiss Cottage in north west London. The buggy/wheelchair area was occupied by two baby buggies and a folded buggy was in the luggage area. We stopped at a bus stop where a man in a wheelchair was waiting. He wanted to board the bus, but the owners of the buggies occupying the designated area would neither fold their buggies nor leave the bus to make space for the priority user, the wheel chair user. The bus driver had to get out to sort out the stand-off. He wanted the buggy users to disembark, but they would not budge. In the end, the wheel chair bound fellow behaved decently, saying he would wait for the next bus.

In my opinion, both wheelchair passengers and buggy pushers can easily manage to wait  (especially when the weather is good) until a bus arrives with sufficient space. After all, the wheelchair user is sitting and waiting as is the buggy borne child, who is often far too big and independently mobile to be confined to a buggy. What do you think, dear reader?