On Saturday the 29th September 2018, we had a wonderful evening at London’s recently opened Bridge Theatre. It is located on the south bank of the River Thames, a stone’s throw from the world famous ‘icon’ of London, Tower Bridge. From the glass front of the theatre’s foyer, there are superb views of: the new high-rise buildings in the City (including the ‘Gherkin’); the White Tower and the walls of the Tower of London; and Tower Bridge, which is beautifully illuminated at night.

The Bridge Theatre opened for its first show in October 2017. The theatre is the brainchild of Nick Starr, of the former National Theatre, and the renowned theatre director Nicholas Hytner. Both of these two Nicks have been long involved with London’s National Theatre. Their creation, the Bridge, is an improved version of the facilities offered by the now ageing National Theatre on the Southbank. Excellent as the National Theatre is, the Bridge seems to have been designed to avoid some of the defects of the former. The newer theatre, which can seat 900 audience members, was designed by S Tompkins and R Watts of Haworth Tompkins Architects. 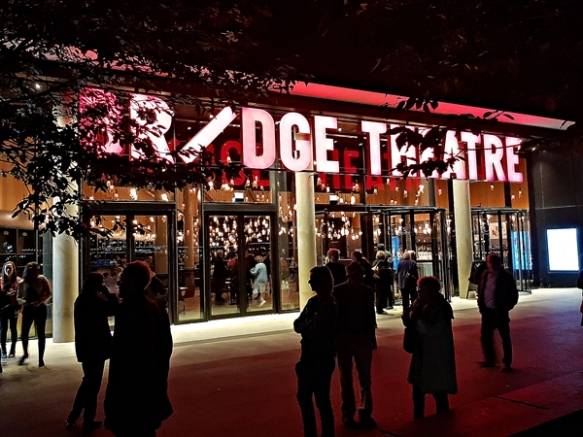 Doorways in the wide glass façade give access to a vast foyer, well-illuminated by a myriad of lamps with curious shades that look like large translucent handkerchiefs. Ample tables and chairs are available for people to sit in the foyer, enjoying excellent food and drinks from the counters lining one side of the space.

When you order food, you are handed a small flat, square receiver that looks like a drinks mat. When your food is ready, lights on the receiver flash alarmingly. The flashing object must be taken to a counter where your freshly prepared food is waiting for you. Despite the size of the foyer and its large capacity, it never felt crowded or noisy. It is a well-designed space. 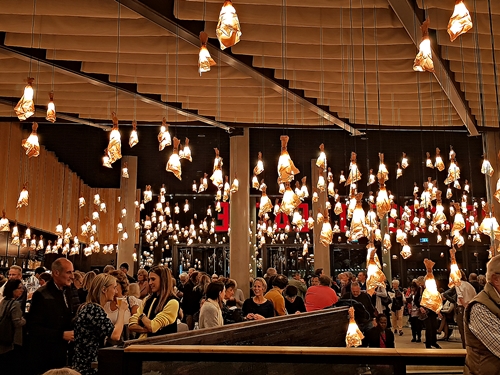 The cloakroom and toilet facilities are easily accessible, not hidden in odd places as they are in the National Theatre.

The auditorium is large, but not too large to be without intimacy. No seat is excessively far from the very wide stage. Sightlines are either excellent or more than satisfactory. We had ‘restricted view’ seats, which we bought at the last moment. They were as good as many ‘full view’ seats in older theatres. The acoustics are excellent. We were seated quite far from the stage, but had no difficulty hearing every word. The play we saw, “Allelujah” by Alan Bennett, was well-staged, well-acted, and well-written. In short, it was highly enjoyable. Set in an ageing National Health Service (‘NHS’) hospital facing imminent closure, most of the actors play either the roles of geriatric patients or those of hospital staff and management. The plot is about the plight of the aged and the plight of the ageing NHS system in today’s profit-oriented, economically declining Britain.

Our visit to the Bridge Theatre was enjoyable and uplifting. I cannot wait to see another performance there.