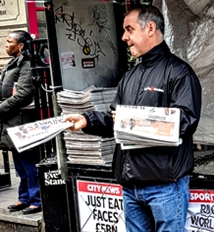 The Metro is a perfect read for a bus or train journey lasting 15 to 25 minutes. It covers much news and contains plenty of other interesting features. As free newspapers go, I would far rather have a copy of the Metro than the Standard.

Time Out is a weekly which provides fairly thorough information about what is happening on the London leisure scene and includes often useful reviews of films, restaurants, bars, theatres, etc. Founded in 1968, it provided a far more intelligent and edgy account of the London scene than its rivals. Until 2012, Time Out was sold to readers for a fee, which was well worth paying. Since September 2012, it has been handed out free of charge each week. For sveral years, I thought that the free version was not as interesting as the former paid version, but of late the quality of Time Out‘s contents has been improving.

These various free periodicals are great but in these days of worrying about the planet, should we not be minimising the amount of paper being used just as we are trying with plastics? Although I am not so keen about using on-line versions of newspapers, they do not involve sacrificing trees or rubbish creation.