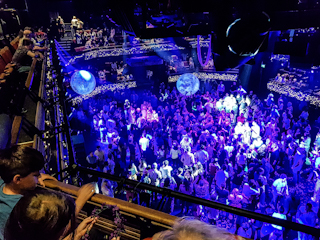 The first time I saw a performance of Shakespeare’s A MIDSUMMER NIGHTS DREAM was in the 1960s in north London (Big Wood in Hampstead Garden Suburb). It was performed by an amateur dramatic group in a clearing in a small wood. There were barely any props. The actors appeared and disappeared in and out of the trees growing around the clearing. It might not have been the very best of renderings of the play, but I found it highly enjoyable and magical. Whenever I think of the Dream, I remember that show in the woods, so long ago, with much fondness.

Since that magical summer evening in the wood, I have seen several more performances of the play, but none of them managed to recapture for me the magical experience  that was created for me by my first viewing of the work.

A few days ago, I watched yet another performance of the Dream. This time it was at the lovely new Bridge Theatre next to the southern end of London’s Tower Bridge. The staging and acting was brilliant. The Director, Nicholas Hytner, had ‘tweaked’ the play slightly but successfully to make it more accessble to contemporary audiences. I hope that Shakespeare would have approved of this latest version. I feel that he might well have done. The ‘show’ was livened up with acrobats, who were not only superbly skilful but also great actors with clear diction, and much music. Despite these additions, the Bard’s original words were not sacrificed or edited in any noticeable way. It was not merely a play, but  a spectacular extravaganza.

There was one aspect of the performance that I did not like. The play was performed ‘in the round’ on an arena where there would normally be stalls seating. Many people had bought tickets to stand on the stage in order to take part in an immersive performance. The actors mingled with the crowd of spectators standing on the ‘stage’. Assistants and the actors themselves shifted the crowds around to make spaces for props and passages through which the actors could move. It was a case of, to use the Bard’s words, “All the world’s a stage…”. This seemed to be very popular with both the audience members immersed in the drama as well as the rest of us sitting in seats. I was not keen on watching a play where the actors are surrounded by swarms of spectators. I felt that the latter diluted the action and were a bit of a distraction. The immersive theatre technique disturbed me, but most of the rest of the audience approved of it.