The Shaking Minarets in Ahmedabad were designed to be resistant to earthquakes many years ago. They are still standing long after the mosque to which they belonged collapsed… 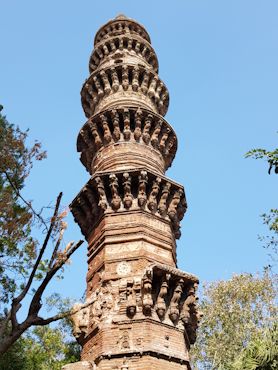 A pair of minarets is all that remains of a mosque. They stand within the precincts of the main railway station of Ahmedabad. The rest of the mosque was destroyed long ago.

Apart from being attractive, these two minarets, the SHAKING MINARETS, are special. They are able to resist earthquakes. They shake or swing instead of falling to pieces during seismic activity.

The large Jumma Masjid in the heart of Ahmedabad lost its two mighty minarets as a result of movements of the earth long ago.

No one knows why the Shaking Minarets are able to resist seismic disturbances. They are not the only minarets in the city that have this ability. When, long ago, British investigators took one of this kind of minaret to pieces, they were unable to discover the secret of its stability. They were also unable to reassemble the structure properly.

Some suggest that the Shaking…