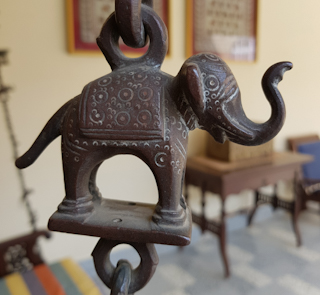 The 50 pence coin, a seven sided silver coloured object, had already been introduced into circulation in the UK when I was a pupil at Highgate School in North London (1965-70). In the mid to late 1960s, 50 pence had considerable purchasing power. For example, this amount of money would pay for two new paperback books.

At Highgate School, all 600 pupils ate lunch together in a large dining hall. The Headmaster, then Alfred Doulton, sat at a high table facing the long tables where his pupils and teaching staff ate.

At the end of lunch, Mr Doulton used to stand up and make brief announcements. If some money had been found lying about, he used to ask if any of us had lost it. Always, a pupil would walk up to the high table to claim the money. Before releasing it, Doulton would ask the claimant to prove that it was his.

I began worrying what I would say if I felt that I had lost the money that Doulton was asking about, especially if it were a valuable 50 pence coin.

So,whenever I had a 50 pence coin, I used a compass or dividers point to scratch my initials, “AY”, on my seven sided coin.

Luckily, I never mislaid any of my 50 pence coins. Had I done so and it had appeared in Doulton’s hand at the end of a lunch time, I would have been able to check whether the coin was mine. I still shudder to think that I would have become the laughing stock if the school had Doulton announced to the assembled pupils something like: “See how prudent Yamey has been. He has even marked his money just in case it gets lost.”

Now, remember if you are ever handed a 50 pence coin and it bears my initials, give it back to me. It’s mine!