Early in November 2018, I saw the opening performance of a new production of “Love Lies Bleeding” by Don de Lillo, which was premiered in 2005, at the Print Room in London’s Notting Hill Gate. The play deals with the question of euthanasia in a situation of a person with persistent vegetative state. The playwright deals with moral and other questions relating to this in a sensitive way. As with most Print Room productions I have seen, the acting was superb, at times gripping.

The Print Room theatre began its life in 2010 in a converted printers’ warehouse in Hereford Road, close to Westbourne Grove. We attended several excellent performances there, seated on not very comfortable chairs. In summer the warehouse, which was poorly ventilated, could become very hot. I remember watching “The Kingdom of the Earth” by Tennessee Williams one hot May evening. The heat in the theatre complimented the seediness of the characters. A year or two ago, the Print Room shifted to the Coronet in Notting Hill Gate.

When I began living near this place, the Coronet was a cinema. It was the last cinema in London to permit smoking in the auditorium. Smokers had to sit in the balcony seats, not in the stalls below them. The cinema had two screens, the larger of which was in what looked like an Edwardian theatre. Indeed, the Coronet started life as a theatre when it was opened in late 1898 (see: http://www.arthurlloyd.co.uk/CoronetTheatreNottingHillGate.htm).    It was designed by a theatre architect WGR Sprague (1863-1933). Eighteen years later, the theatre began to be used as a cinema. Many of its original features were retained. By 1923 it became a full-time cinema. 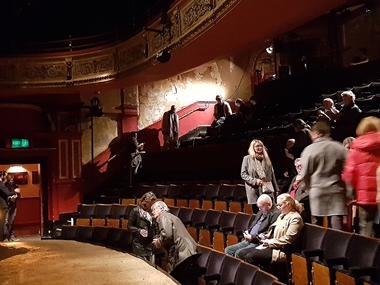 In 1972, the Coronet was threatened with demolition. It was saved and made subject to conservation regulations following local residents’ successful protests. In 1993, when I first came to live close to the Coronet, the cinema looked run down but romantically picturesque. The local Kensington Temple Church bought the Coronet in 2004, planning to use it as a place of worship (as has happened with so many former cinemas in London). As a digression, it is interesting to note that cinemas in London have been converted to churches, whereas in Communist Albania the reverse was true during its period of official atheism.

The Kensington Temple spruced up and restored the Coronet, but kept it running as a cinema. They used it occasionally as a place where their congregation could listen to preachers. Once on a Sunday morning I passed the Coronet, whose doors were open, and looked into the auditorium where a very enthusiastic clergyman was rousing his lively audience.

The Coronet cinema closed in 2014. It had been bought by the Print Room, which had shifted from Hereford Road. Thus, the Coronet became a theatre once more. The Print room have preserved many of the decorative features of the original theatre but have made some major internal modifications. A new stage has been built to cover the space where the original lower level stalls were once. This stage extends to the lower level of the raked seating that had formerly been the original theatre’s Dress Circle. The seats in this Circle have become the new auditorium. Although much has been done to preserve original features, the theatre has been decorated to give its walls a fashionable distressed appearance. The place reminds me a little of what I remember of the Theatre des Bouffes du Nord in Paris when I saw it in the 1970s soon after the British director Peter Brook re-opened it. 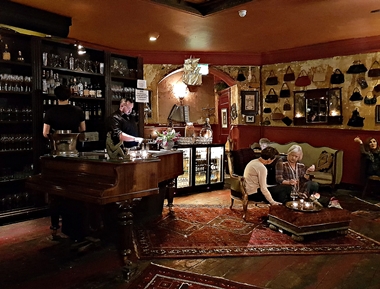 Although the theatre and its productions are wonderful, the bar must not be missed. It is located beneath the new stage in the space where once the stalls were located. Its concave floor reflects the raking of the seats that were once affixed to it. A grand piano serves as the bar where drinks are sold. The dimly lit bar is decorated quirkily with all manner of bric-a-brac, largely chosen by the staff and, no doubt, sourced from the nearby Portobello and Golborne markets. The bar is open an hour before and an hour after a performance. It is closed during performances because its ceiling is the theatre stage. Even if you cannot manage a play, a visit to the Coronet’s bar is a treat.